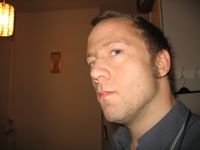 Eh, what can someone say, well, interesting facts, I was born in Thailand (Father was building ports / bridges). Although I don't have a pilots licence, I can fly an aeroplane, all good if I get in a James Bond type situation. I had a role in a short film shown all over Europe. I once interviewed the Beta Band. I work in engineering, so I guess that makes me a problem solving type of chap.
Well that's enough about me, onto the lass that I would attracted to, primary I guess, I like to have interesting conversations about things, the World, the Universe, and the price of Fish and Chips. Old cliché, I know, but I prefer average, but interesting people, to glamorous but dull. Well that’s as far down the egotistic path that I shall venture, so give me a shout.

More about Nicholas: Nicholas is a 46 year old male from Derby, Derby who works in Technical, Professional. Nicholas is blue eyed with an average/medium build and is a Libra.