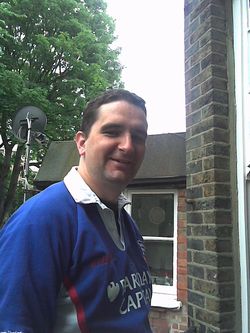 A country boy who ended up in the city, I seem to have wound up in London. I still get outdoors when I can, but spend most of my spare time catching up with friends and playing or watching sport.

I work on Canary Wharf most of the time, but I usually have a day or two off a week, which is great, and while I'm supposed to spend it working, I go and watch cricket (or stay in and doss around) more often.

Weekends away are the best. I get away reasonably often, sometimes to hills in the UK, more often to somewhere in Europe. I used to go away for a week or two pretty often but not for a while. Maybe I'm overdue a big holiday. Going to Oman soon, I think, so sunburn city.

Hope that will do because I'm just registering right now and I've run out of inspiration. Will come back in a day or so and put some more stuff. If you've read this far then thanks (and well done).

More about Villagesam: Villagesam is a 46 year old male from Maida Vale, London, Greater London who works in Consultant. Villagesam is brown eyed with an average/medium build and is a Pisces.