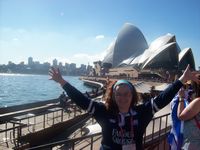 I talk -A LOT...I hope you don't mind that.Plus I often go off in tangents when something...

Anyway...feel free to ask me anything you're not sure about and I'll be quite happy to clarify... :-)

I've been told I have a strange sense of humour and I can be sarcästic but who isn't?

I would like to meet an intelligent girl who likes to laugh and has a good sense of humour. I might seem shy at first, but once you get me started I NEVER shut up!!

Gimme a message and I'll tell you more!

"You know the feeling when it's the bottom of the ninth, the bases are loaded, and you know the next one's coming right down the middle. And then, you just connect... and for an instant, you know that it's going over the fence and out of the park... and further than you could ever imagine"...
In a nutshell, I'm looking for Ms Right.