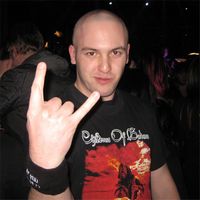 I'm 1/2 Italian and an Onshore and offshore and oilfield engineer, who's recently moved to scotland's capital.

I've been told I look, and am built like, a cross between ACDC's Brian Johnson and Rammstein's Till Lindemann. Therefor I ain't no "flake" that's for sure (bonus points for fully understanding that! ;) ).

I'm very fun loving, quite geeky, and consider being a big kid to be a huge complement (w0000000t) but can be grown up should the occasion require it. I have a strong stomach as well as a very dirty, filthy, sarcy(sp?), and sick sense of humour, (the 3 vampires is my favorite joke :P ). seeking similar for comedic banter.

I like travelling and thanks to my job, It has taken me to a few interesting places in this continent, as well as the states and the orient.

I have seen my closest male friends and colleagues disappear under the giant thumb of cohabitation, marriage, and (Gott verbote) children. They have been an inspiration to me... ON HOW NOT TO LIVE LIFE!! Ergo, I will NEVER get engaged or married, nor will I ever want to live with anyone I'm romantically involved with. And, as an added consequence, the only offspring i desire is their back catalog, therefor none of you should have (nor ever want to have) any in homosapienic bi-pedal form :P.

In future romantic encoun ters I seek wom(a/e)n who want men in order to complement her, NOT COMPLETE HER. They must also be Ok with the job I do, and how long I spend away because of it.

I'm a man of logic and peace, and common sense, and I expect any future romantic prospect to be likewise (apart from the man bit :P ), should any discussion or disagreement arise I like to discuss things in a logical and calm manner, without things getting heated or raising voices. There is enough drama and emotion in my home and work life as it is, and I do not want to add to it whëre possible. If you're the kind girl that will definitely add to it then I ain't the guy for you.

I'm pretty open minded, And I'm open to trying new things or going new places at least once. However I do not take too kindly to being forced to change what I do like, or even give it up for the sake or benefit of anyone else.

within the last couple of months I have moved to Edinburgh from Aberdeen (the latter being the world's biggest village), I'm renting down here as i See this as a short term stay before I jump to the continent, I caught a large chunk of the Ed festival, but outside of that I've been away lots with work, so haven't yet worked out what I like and don't like about the city overall yet. I really like Berlin, Germany (home of Rammstein, and is, what I consider to be, Eurometalhead heaven lml lml ) & I'm in the process of arranging things with work to move there. Special attention shall be given to “Fraulines” that are German, or can speak German with some degree of fluency, because a) I love the coun try and its people and it's language, b) because I'm trying to learn it and c) I adore the female German accent.

Alternatively if you're just childless and have a good supply of dirty jokes, by all means, get in touch anyways, I could use a laugh :)

More about deed elvis: deed elvis is a 39 year old male from Stockbridge, Edinburgh who works in Other. deed elvis is brown eyed with an muscular build and is a Capricorn.