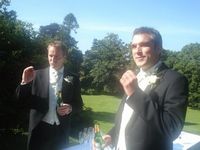 pretty chilled but know what I want. I`m determind not be the old man on the end of the bar saying I wish I did this or that.
I`m sporty but not a sportoholic. I love the coun tryside and the city in equal measure. I`d like to do new things and would consider moving to experience new things.
I`m fiercely loyal to my friends and family and expect the same in return.
My yardstick of someone is whether I can spend a day with them without wishing I was somewhëre else!

More about richard: richard is a 50 year old male from east, Cardiff who works in Legal. richard is blue eyed with an athletic build and is a Libra.