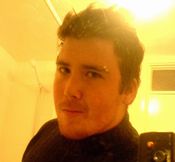 Hey I'm Andy i'm 21 and love music its what i live for but not just any kind of music lol. It has to be Metal or Hard Rock!! i'm in a band called Low Expectations just started this year although i have been in many bands before but never gigged because people either left or couldn't be bothered with their nstruments anymore. I'm hoping this band last long and we look to gig very soon (towards end of April). I started playing Guitar 6 years ago and moved to drums 4 years ago don't think i would be able to cope with life if i didn't have those two things.
If you would loike to know anything more about me then just ask.