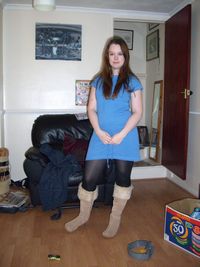 I am a 25 year old girl with a 4 year old son. I just moved back to England from Holland whëre i lived for 6 months so looking for a new job so me and my son can settle back in here. I love music,films,reading and world of warcraft. I like people who have a nice personality and maybe also brown eyes too hehe !

More about Lil Gems: Lil Gems is a 36 year old female from York who works in Other. Lil Gems is blue eyed with an average/medium build and is a Capricorn.