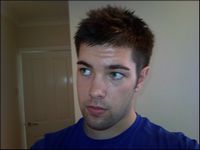 well if theres anything you would like to know and find out sure message me but i will keep this short and sweet. currently studying software development and programming at present, done hardware before it. interested in training and racing the bike for a team that i am with and represent ireland and northern ireland when called up which i race across ireland and uk and europe. would like to find some one genuine that is not pretending to be some one but i would get on grand with anyone. love to shop and to cook my own food and just to relax and chill out. but theres loads more i could talk about but il save that for later.

More about andy: andy is a 31 year old male from ballyhackamore, Belfast who works in IT. andy is blue eyed with an athletic build and is a Aquarius.