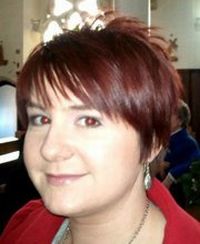 I'm a bit of a contradiction in terms really, on one hand I'm outgoing and bubbly when I surrounded by my friends and family but I am equally introspective when I am in unfamiliar surroundings. However I tend to overcome that fairly quickly and usually talk at a million miles an hour to cover any nervousness! - put anyone off yet??!!

I'm wouldn't say that I'm on a par looks wise with Cameron Diaz or Angelina Jolie, I'm just an Average Jane, nor am I stick thin or hugely overweight, I'm kind of in-between and it's not likely to change but I like to think that people take me on who I am not just what I look like!

I am a semi-professional barbershop singer, I sing with a ladies chorus and we compete on a national, European and international level and succeeded several times over at winning Gold at both National and European competitions.

I'm looking to meet someone for a potential long term relationship, someone who enjoys good company curled in front of a movie with good food and a nice bottle of wine (when the mood takes) or equally going out for a few drinks (although not done that for a few years!) or long walks and days out discovering new places.