4 Reasons Older Women Dating Online Fail & How To Fix It

Online dating is great for people of all ages these days. Whether you’re 25 or 75, online dating sites are now thriving with singles of all ages, meaning the odds are in your favour for finding someone to connect with. However, it’s been reported that older women dating online fail more frequently than their younger or male counterparts. At UrbanSocial we want all singles to succeed at dating. So we’ve done some research into why it is that older women dating online can fail, and what we can do to fix it.

Why Older Women Dating Online Fail And How To Fix It

It’s all about mindset. Older women dating online will often think that there are no good men left to date. They feel that it’s a lost cause from the very start, and they’ll never succeed in meeting anyone that would suit them. Starting out dating with this mentality is only going to lead to failure. But this is an easy problem to fix. It’s a true fact that older generations are finding partners through online dating sites and apps these days. Just take a look at the popularity of the likes the latest mature dating apps like Lumen to see how successful it has become.

It’s important that mature women enter into the dating arena with a positive outlook and an open mind. Try to be open to meeting new and different people. Allow yourself to explore different avenues, reach out of your comfort zone and give people a chance.

Or put another way, you’ve become too accustomed to a certain lifestyle. Mature women who find themselves looking for a new partner to share their life with may struggle to find a match if they aren’t prepared to change anything in their own life. Maybe they are a single parent dating, divorced or widowed. Finding someone that will slot into your established way of life could be a deal breaker. Rather than looking for someone to fill that gap, dating in later life should be seen as more of a journey and a shift for both sides. While you shouldn’t have to change for anyone, it’s important to be open, flexible and responsive.

3. Waiting For The First Move

Mature dating is all about going for what you want in life. If you’re dating over 50 and sitting back and expecting someone else to make the first move then this could be where you’re going wrong. The old rules of dating are long gone. If you are interested in someone, let them know about it, and get in contact. It’s understandable that many older women can feel uneasy or shy about making first contact or coming across too keen. However, being brave and going after what you want is the best approach to mature dating.

Some singles think that signing up to an online dating site and sitting back waiting for the messages from admirers to flood in is all that’s needed. Unfortunately dating requires all singles, young and old to be active. Firstly, making sure you upload your best online dating profile and dating photo are working for you is the first critical step. This should be something that takes some time, research and thought to get right. Show the best version of you in your photo and your description. Highlight areas about yourself that are interesting and likely to spark up conversation. Sound positive in your approach to dating and life.

Once your dating profile is sorted, you actually need to be active online. Not only because it takes two to date, but also because the most active online daters are also the most visible to others. If you only log into your account every so often you’re far less likely to be found by other singles than if you are more active. So take a look around the sites, send some messages to other members, strike up conversation, and be proactive and active online. The Best Dating Sites for Singles This Year

We’re all glad to see the back of last year, and have high hopes for this year. But it’s not quite turning out to be as fr... 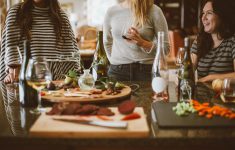 I’m of an age where it would be verging on unusual to meet a man who doesn’t have kids. I don’t have any of my own however s...